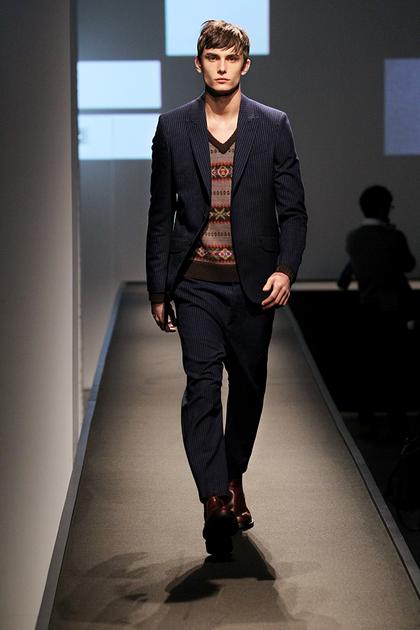 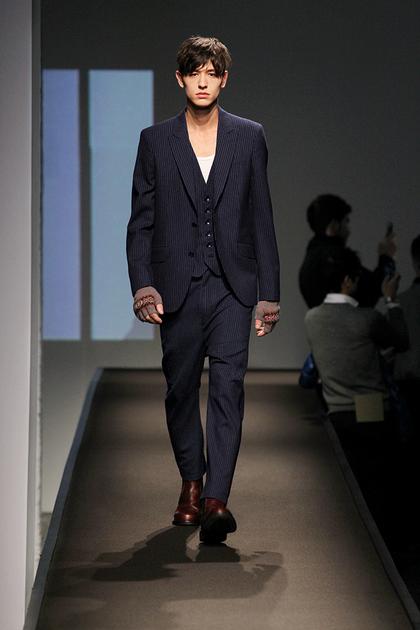 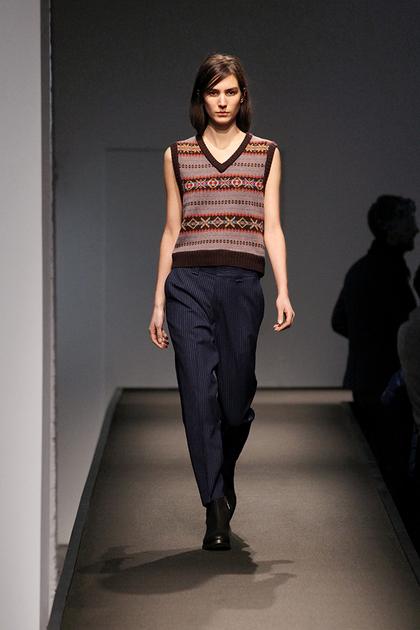 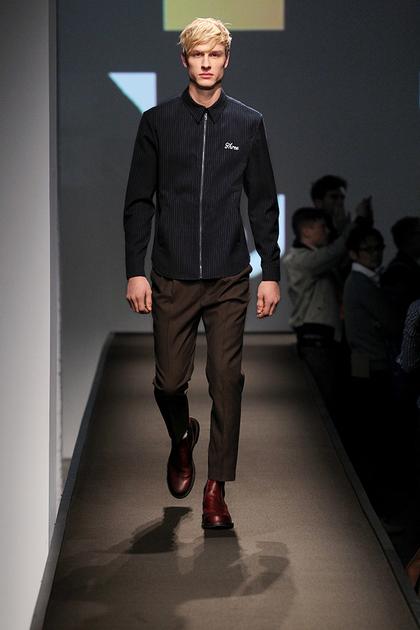 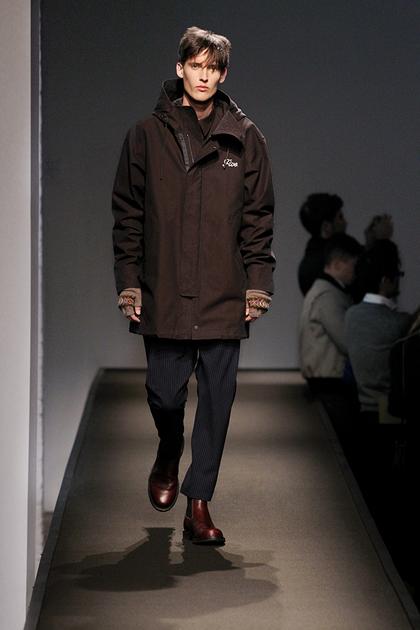 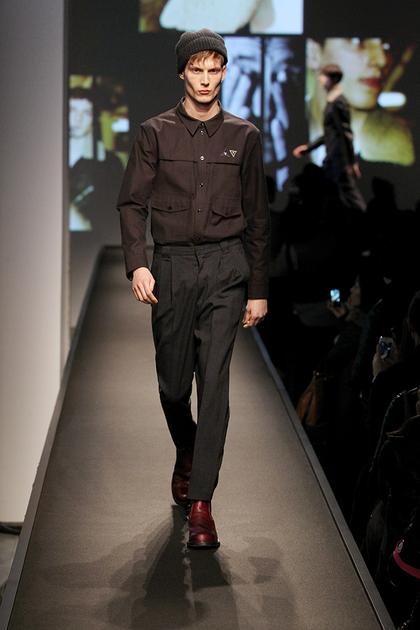 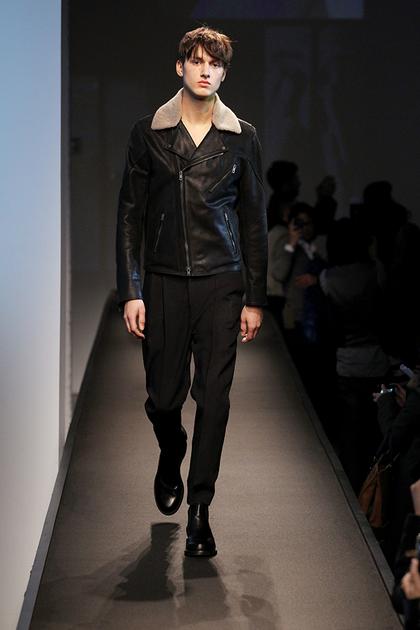 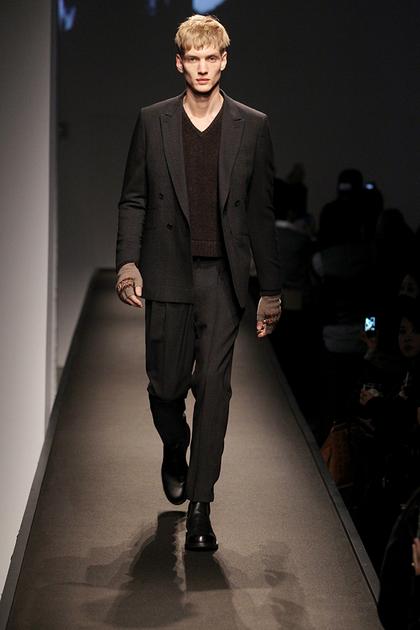 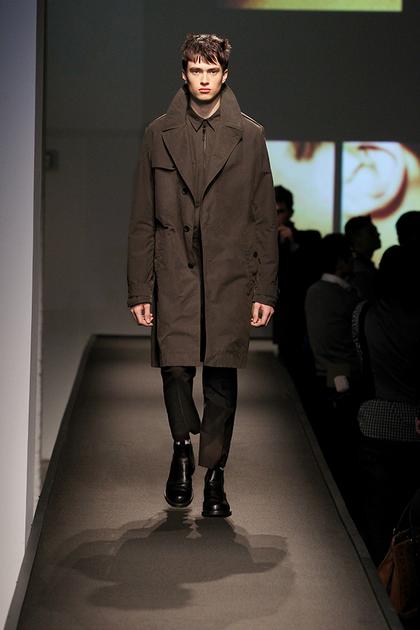 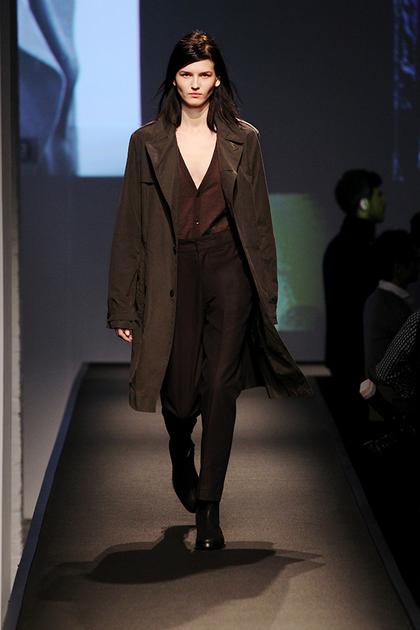 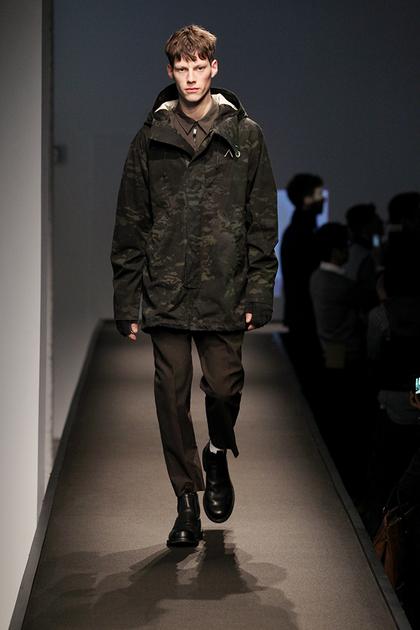 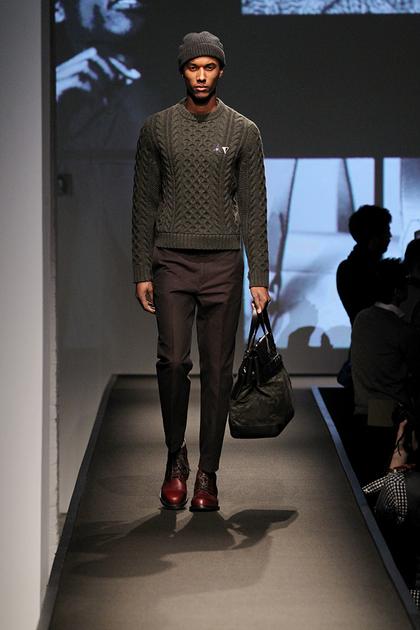 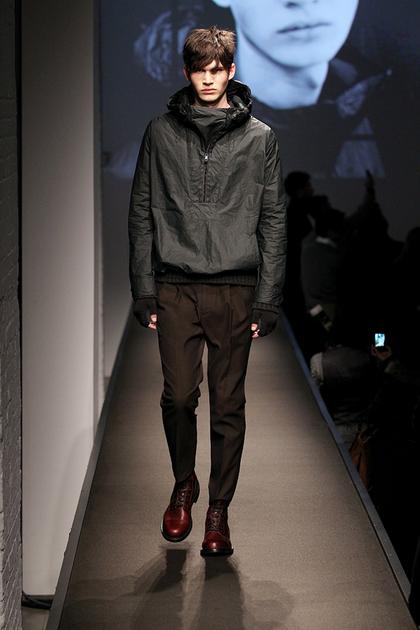 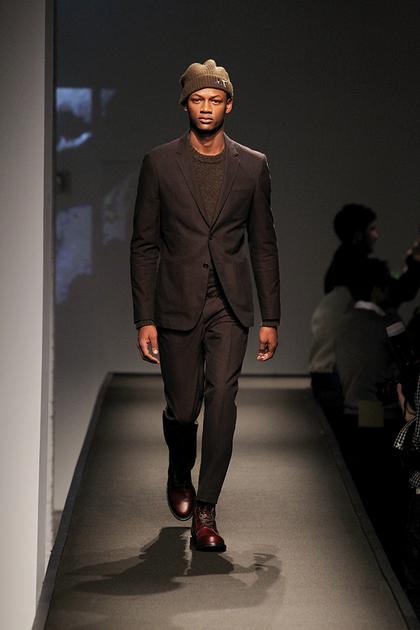 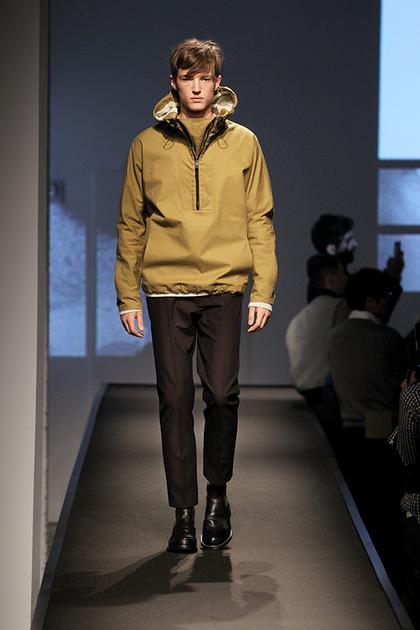 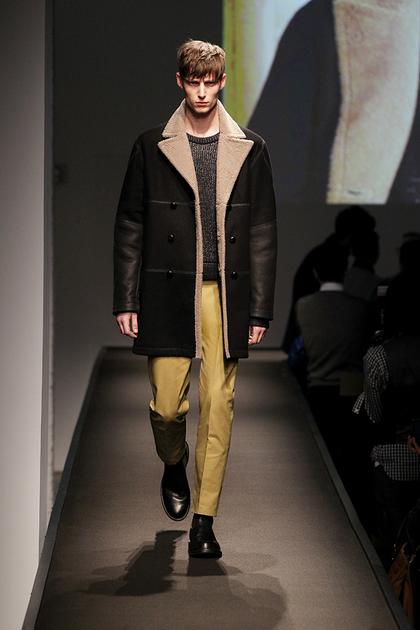 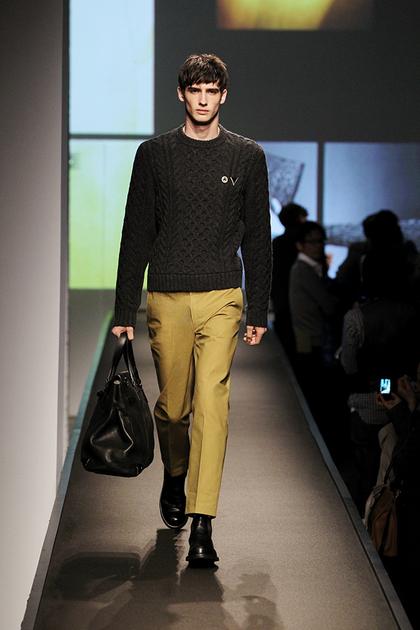 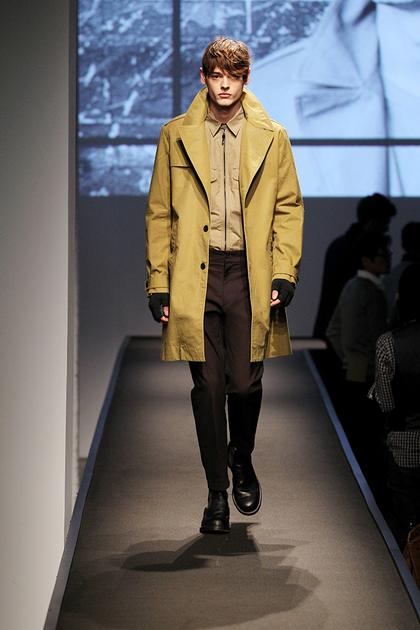 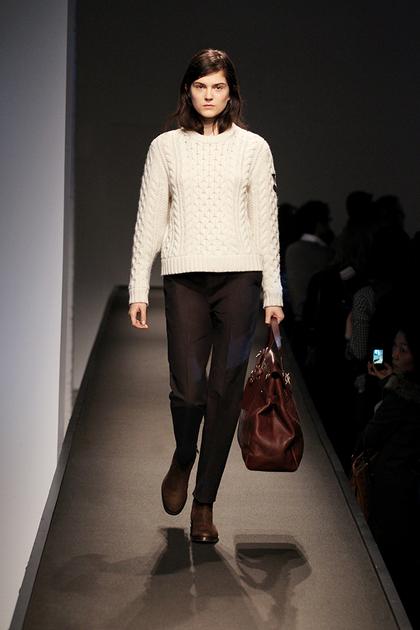 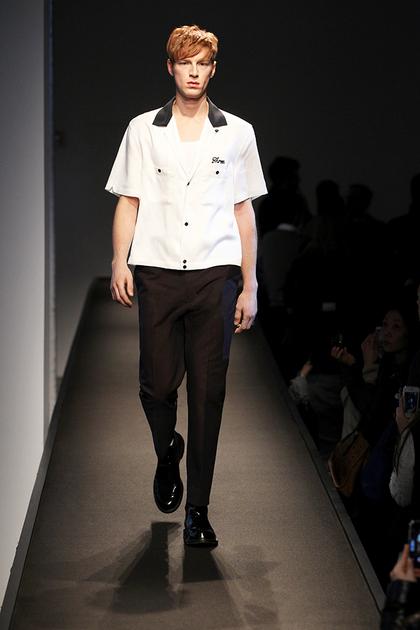 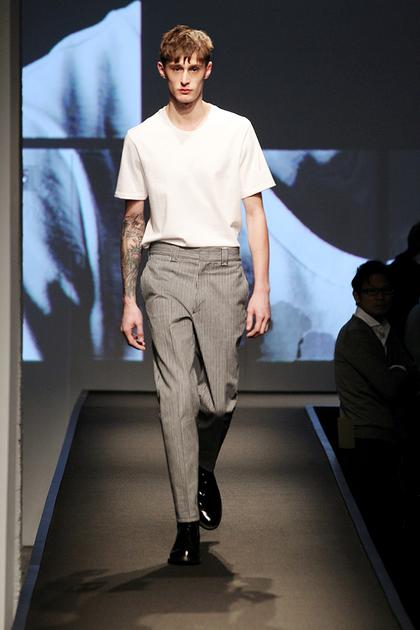 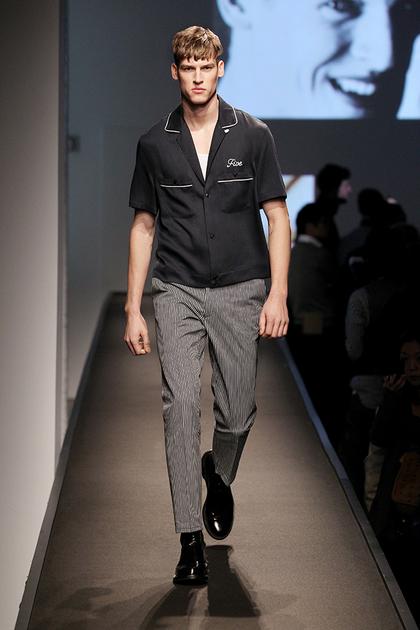 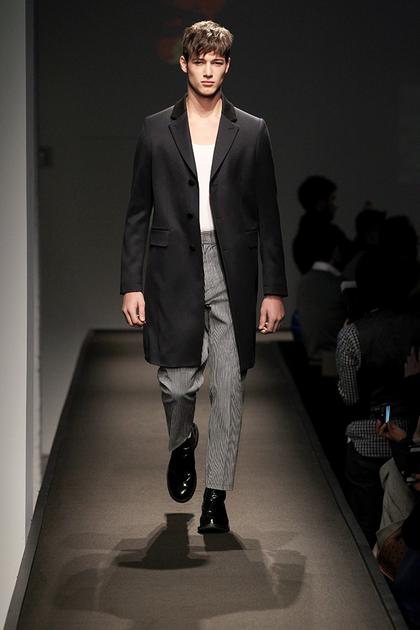 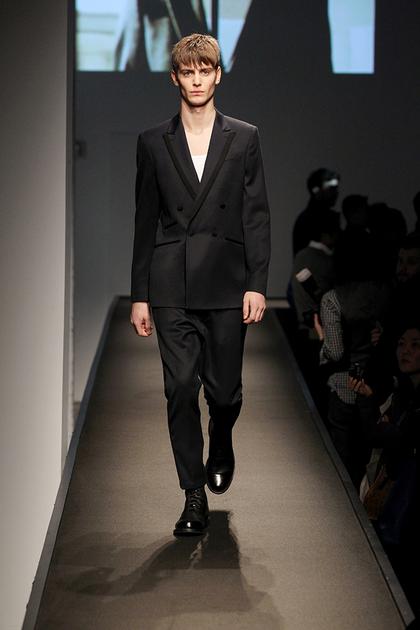 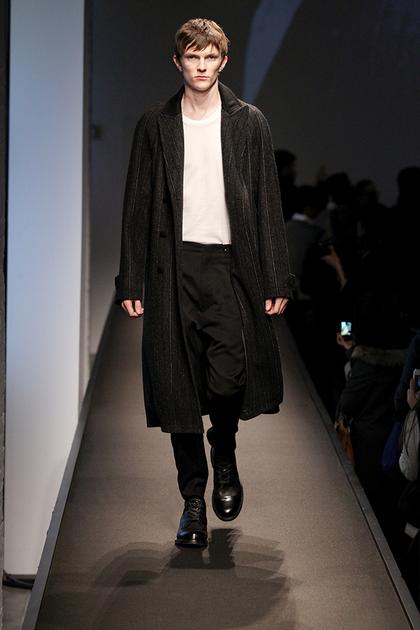 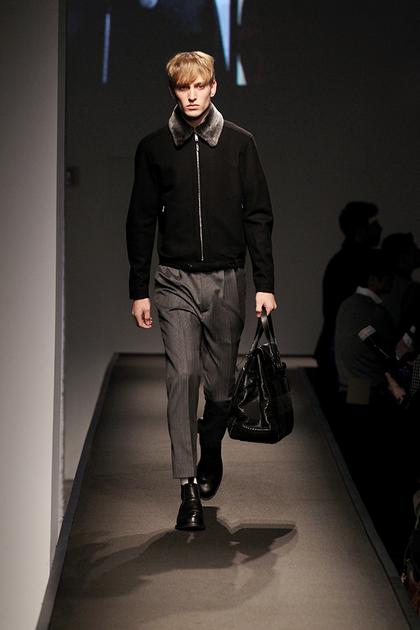 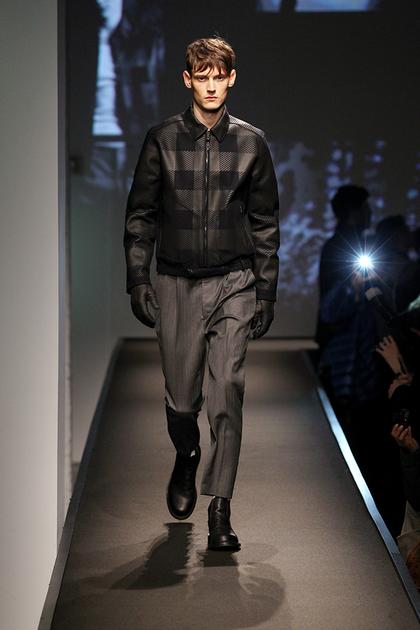 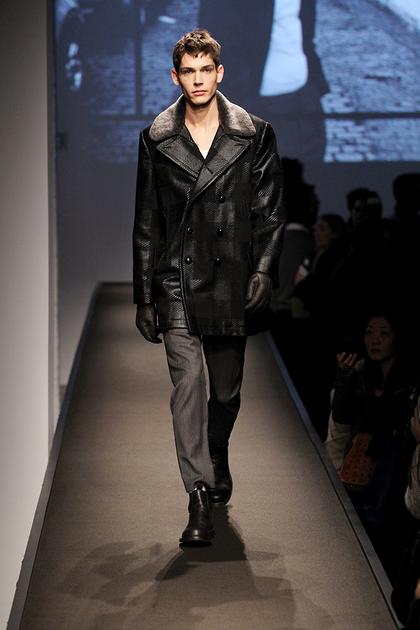 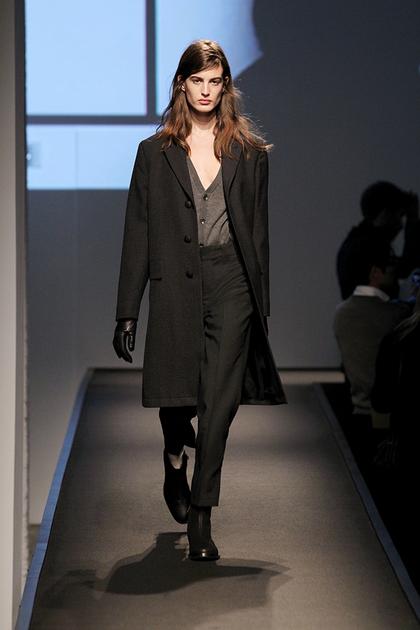 "For Fall Winter 2014, rag & bone mined inspiration from British workers' unions of the late 70s/early 80s and riffed on 50s Americana to create a modern menswear collection, rooted in innovative constructions and the contrast between technical and heritage fabrications. ""The collection is inspired by iconic and traditional menswear that the guy on the street can wear effortlessly in his own individual way."" – Marcus Wainwright A three-piece suit handed down to Wainwright from his father inspires tailored wool separates crafted from Abraham Moon pinstripe fabrication. The formality of the suiting is off-set with Fair Isle vests and white tanks. Traditional fabrications get distinctly fashion-forward silhouettes with exaggerated drop crotches on pants. Modern context is also seen in gussets, twisted seaming and darts in place of traditional seams. Military appears across multiple styles and hybrids. A lichen green canvas spearheads the inspiration’s core
colorway and a distinctive camouflage designed and exclusive to Crye Precision is also featured. Outerwear also explores unexpected fabrication meldings as witnessed in a bonded shearling to melton overcoat. Rugged cable knit Aran sweaters, in cropped silhouettes, evoke unmistakably effortless masculinity. An outsized military trench coat with articulated sleeves, emphasizing the military message, sets the collection’s stripped back tone with the pairing of sharp button-ups, tucked firmly into pleated pants. Beatnik overcoats, cropped jackets, iconic white t-shirts, railroad stripe workwear, retro chain stitch bowling shirts and high-waisted cropped pants reflect the purity of styles from 50s Americana. The theme of American classics continues with a reinterpretation of traditional check buffalo plaid in outerwear, elevated in foil printed melton in a navy and black colorway, with shearling collars adding pops of luxury."